In trying to clarify the idea of Pluralism, I drew a diagram like the one below: 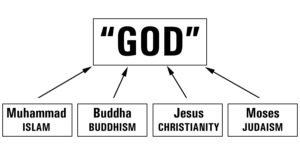 On seeing it, a friend exclaimed, “That’s exactly what I believe!”  “And why so?” I asked.

“Well, I think that when anybody worships or prays to or thinks about ‘God’, the name may be different, but that Supreme Being is the same.”

“Then you do not claim to hold to any religion?”

“Actually, I’m a Buddhist.  But I believe everyone’s religion, be it Hinduism, Christianity, or Islam, lead to the same Ultimate Being, just as in your drawing.  I can’t see how anyone can claim this or that to be the only correct way.”

“Does Buddhist literature ever state that Bhahma, Vishnu, or others, along with Buddha, lead to this Ultimate Being?”

I found this idea of “all roads leading to Rome”” to be espoused by the majority.  Sometimes, it was not an open claim, just a lingering suspicion in the back of the mind, even among those professing their faith strongly.

“When Jews or Muslims, for example, praise God as Creator of the world, it is obvious that they are referring to the same Being.  We may assume that they are intending to worship the one Creator God that we also serve…  If people in Ghana speak of a transcendent God … how can anyone conclude otherwise than that they intend to acknowledge the true God as we do?

“Of course Buddhism is not Christianity and does not try to be.  But how does one come away after encountering Buddhism and deny that it is in touch with God in its way?” Clark H. Pinnock, quoted in Ramesh Richard, The Population of Heaven (Chicago, IL:  Moody Press, 1994), p. 81.

“God is in the world—but Buddha, Jesus, Muhammad are in their little closets, and we should thank them but never return to them.”  W.E. Hocking, Living Religions and a World Faith (New York, MacMillan, 1940), p. 231.

“To understand God is to listen.  Listen to Jesus and Muhammad and Buddha, but don’t get caught up in the names.  Listen beyond them; list to God’s breath”—a Zen saying, quoted in God’s Breath, John Miller and Aaron Kenedi, editors. (New York:  Marlowe & Company, 2000), back cover.

“Pluralism—recognizes not only the existence of other religions but their intrinsic equal values.”  Timothy George, Is the Father of Jesus the God of Muhammad?  (Grand Rapids, MI:  Zonadervan), p. 128.

Whenever I asked if this was found in their written literature, there was hesitancy first, then a slow acknowledgement that it was not there.  So I went to the various scriptures to see what really was there.

“I am the goal, the upholder, the master; the witness, the home, the shelter and the most dear friend.  I am the creation and the annihilation, the basis of everything, the resting place and the eternal seed” (Bhagavad-Gita, 9:18).

“Allah!  There is no God but He—The Living, The Self-subsisting, Supporter of all—His are all things in the heavens and on earth—His throne doth extend over the earth—He is the Most High, The Supreme” (The Quran, 2:255).

“This Lord is truly the Arhat, fully enlightened, perfect in his knowledge and conduct, well-gone, world-knower, unsurpassed, leader of men to be tamed, teach of gods and men, the Buddha, the Lord” (Conze, Buddhist Scripture).

“I have sworn by Myself; the word has gone out of my mouth in righteousness, and shall not return, that to Me every knee shall bow” (Isaiah 45:23).

“For there is no other name under heaven, given among men by which we must be saved (Acts 4:12).

These statement were unequivocal, sharp, and clear.  No ambiguity need be entertained.  No, I did not find in any of the writings the sanction that the other religions were a good, equal alternative.

“In a broad sense all religious traditions are exclusivist, inasmuch as they maintain their central affirmations to be true.”  Ramesh Richard, The Population of Heaven (Chicago:  Moody Press, 1994), p. 73.

“At the heart of every religion is an uncompromising commitment to a particular way of defining who God is or is not and accordingly, of defining life’s purpose…. Every religion at its core is exclusive.” Ravi Zacharias, Jesus Among Other Gods (Nashville:  Word Publishing Group, 2000), p. vii.

“What is truly arrogant is the postmodernist pluralism which, in vain pursuit of a superficial tolerance, negotiates away the ultimate commitment by which any religion lives” (George, Is the Father of Jesus the God of Mohammad?)p. 93.

There was a severe clash between the sacred writings and the claim of Pluralism.  Both could not be valid, and in fact, they were mutually exclusive.  I would have to examine Pluralism.

Pluralism is nothing more than wishful thinking.  It is not found in the sacred writings, and the reasons for it do not stand scrutiny.  As an honest inquirer, I must lay it aside and prefer the clear, exclusive claim of each religion.