Please click a corner of a page to turn that page. 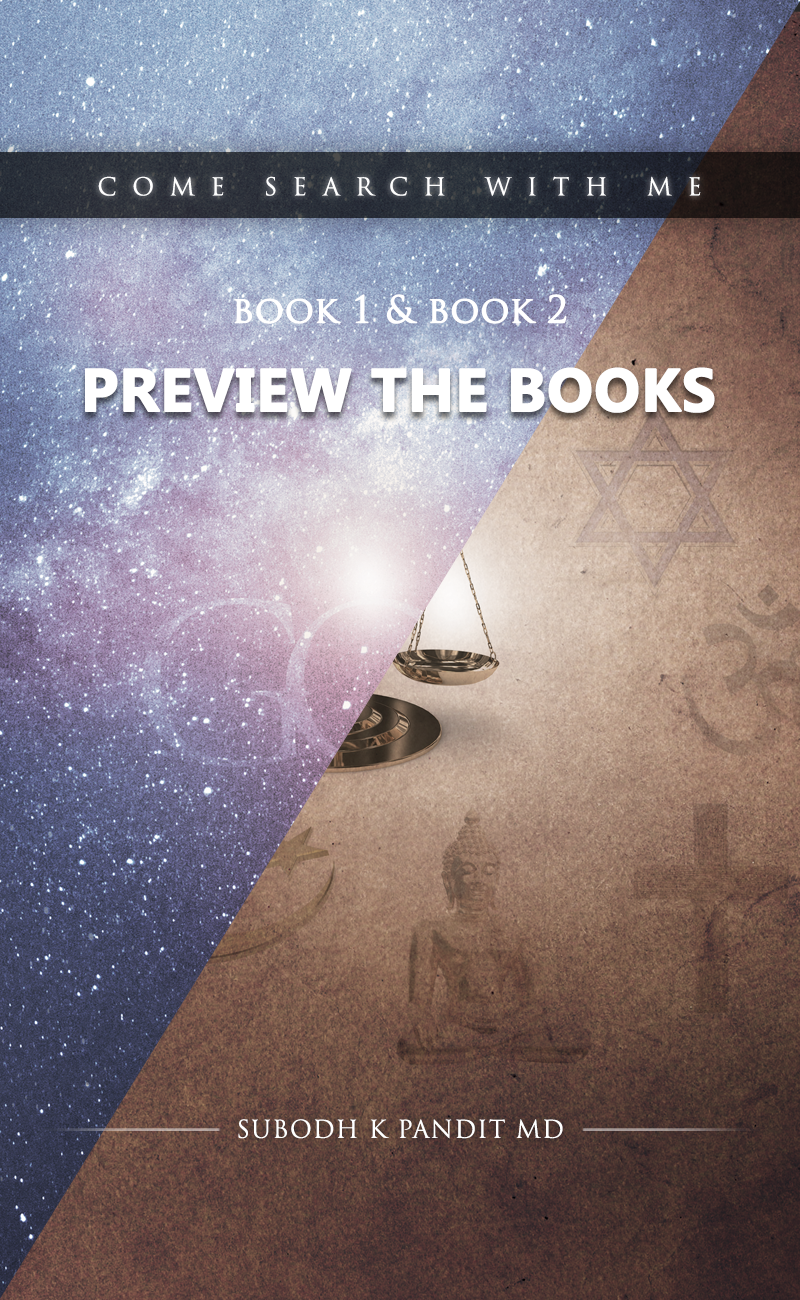 We need to be careful about one particular attitude—pride in claiming to be open-minded. We like to be known as reasonable, balanced individuals. But we are seldom fair and unbiased. Everyone is steeped in what is called ‘confirmation bias’ – the tendency to recall, select and interpret evidence to suit and support our pre-existing beliefs. And that is why introspection is vital. We all have, compounded in us, the attitude of a believer, a skeptic, along with that of an inquirer, and can flit from one attitude to another so smoothly that we ourselves don’t notice the change. Here is an example:

One of the factors that creates the inquiring atmosphere is ‘honesty’. This is a scarce commodity! People will do anything, just to avoid the appearance of ignorance. This has become so much a part of us that it will take more than an ordinary effort to recognize and reject it. One way is to make a definition of honesty, and then rigorously apply it. Here is such a definition: “Honesty is the willingness to accept and acknowledge the value of a point or argument, no matter who brings it to the table, even if that affirmation has the possibility of destroying my own previous stand.”

We should be prepared to go where the evidence leads, and acknowledge it without hypocrisy.

To inquire seriously is to inquire honestly.

A few decades ago, one of the main arguments against the idea of a creator-God, was the claim that God created the earth/universe from nothing. Creatio ex nihilo was roundly criticized, jeered and taunted. It was an easy pick, as an argument, to categorically deny the existence of God.

Today, almost all theoretical physicists claim that the universe sprang into existence from absolutely nothing. In fact they vie with each other, in trying to get to the most credible description of creatio ex nihilo!

Isn’t it a paradox, that one of the strongest arguments against the existence of God, is, today, the most sought-after explanation for the origin of the universe?!

Theists have not changed. In fact, they were right after all! “For the scientist who has lived by his faith in the power of reason, the story ends like a bad dream. He has scaled the mountain of ignorance; he is about to conquer the highest peak; as he pulls himself over the final rock, he is greeted by a band of theologians who have sitting there for centuries.” Robert Jastrow, God and the Astronomers (New York: W W Norton, 1992) p. 107

The cornerstone of the entire theory of evolution rests on the claim that similarity denotes ancestry/genealogy. “We have no written pedigree; we have to make out community of descent by resemblances of any kind.” Charles Darwin

Let us take, for example, two organisms A and B. Organism A has a genetic makeup Aa which gives rise to morphology A1. B has a genetic makeup Bb that causes B1 features. The closer genetic makeup Aa is to Bb, the more similar are their morphological features A1 and B1. However, this generalization does not prove that A ever changed to B. It is true that Aa causes A1, and Bb causes B1, but that does not prove that A became B. Aa is not the cause of Bb, and Bb is not derived from Aa. “. . . we have also proved that a morphological similarity between organisms cannot be used as proof of a phylogenetic (evolutionary) relationship. . .” N. Heribert Nilsson. “There is not the slightest evidence that any one group of the major groups arose from any other.” Austin H. Clark

The only way to establish connection between two organisms is to provide multiple chains of intermediate forms in sufficient number and quality to convince an inquiring scientist. But the data for this is entirely absent. There is not a single complete chain available to validate the theory.

The fundamental principle, that similarity denotes ancestry/genealogy, has remained unsubstantiated.

The theory of evolution, contrary to wide acclaim, does not fit into the halls of science, because it meets none of the criteria required. On the contrary, it possesses all the criteria that should not be found in a genuine scientific theory. How then shall we classify it?

The reason it does not fit into a scientific mold is because it is actually history! It is a historical construct thrust onto the science and systematics of biology. The theory says that form A changed gradually to finally become form B. The study of the details and features of forms A and B constitute the science of biology. The various features elucidated from that study allow for the systematics (classification) involved. It is obvious that one can study the whole of biology, and classify every organism on earth, without a single word of evolution. Biology will not suffer one whit if the theory of evolution is removed and set aside.

What might happen if we removed evolution from science and placed it in the field of history? If ever it is classed and accepted as history (which it really is!), it would constitute such worthless history that no university would retain it in its department of history. Historians would rise up in vehement protest, and ban it from being taught in school.

The theory of evolution fails as science and flops as history!

Pluralism claims that all religions (belief systems) are equal, and that they ultimately lead to the same goal. But on examining the various writings, it becomes very clear that this concept is nowhere to be found in them. Further, they make irreconcilable, contradictory claims which do not allow anyone to say that they are equally good. “At the heart of every religion is an uncompromising commitment to a particular way of defining who God is or is not and accordingly, of defining life’s purpose. . . Every religion at its core is exclusive.” Ravi Zacharias

If there are multiple claims of being the only way, logic would dictate that only one of them is legitimate in making that claim. And attempting to identify that way would constitute the ultimate challenge to a true inquirer.

The endeavor becomes daunting when one realizes that the tenets of beliefs, by themselves, cannot be realistically compared. Other factors must be brought into consideration. One such factor is the historical base of the religion.

One does not have to espouse the beliefs to test the historical veracity surrounding the delivery of the message. The comparison could be based on questions regarding the story rather than the doctrines. It is on this point that the author focuses his Search, utilizing ten questions addressed to the writings and to the founders. A truly unique perspective!

HISTORICITY OF THE NEW TESTAMENT

Most people when considering the New Testament, immediately think of the virgin birth, the various miracles, and especially the story of the resurrection, and dismiss the writing as mythological. This is to be expected on a superficial glance. But to be a fair inquirer is to weigh the evidence as impartially as possible.

Here is one way: Make a classification of the types of literature and see where the writing fits. Ancient literature may be classified into folk tales, legends, myths and historical types. The historical is further evaluated using three common sense parameters: The gaps, the number of manuscripts backing the story, and the proximity of the authors to the events. The gaps refer to the time periods between the event, the oral tradition, the writing of the original manuscript, and the date of the earliest manuscript available.

An honest evaluation reveals that the New Testament is by far the best attested ancient historical piece of literature in the world. It is so credible that, “To be skeptical of the resultant text of the New Testament books is to allow all of classical antiquity to slip into obscurity, for no document of the ancient period are as well-attested bibliographically as the New Testament.” J W Montgomery

If we don the garb of a sincere inquirer and give credit wherever it is due, the information is astonishing. We should let the evidence speak for itself! 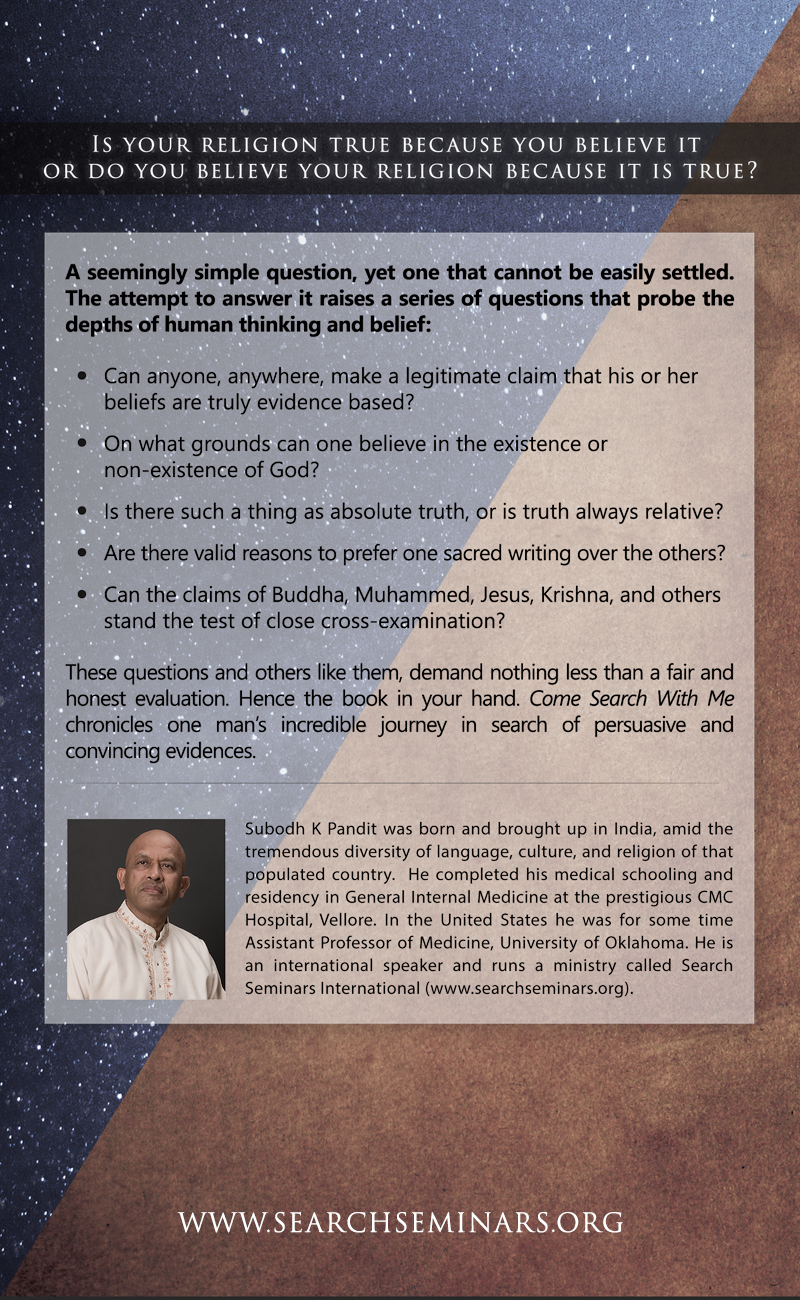